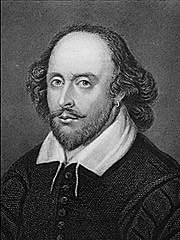 SHAKESPEARE, William (1564-1616), the supreme English poet and playwright, universally recognized as the greatest of all dramatists.

A complete, authoritative account of Shakespeare's life is lacking; much supposition surrounds relatively few facts. His day of birth is traditionally held to be April 23; it is known he was baptized on April 24, 1564, in Stratford-upon-Avon, Warwickshire. The third of eight children, he was the eldest son of John Shakespeare (d. 1601), a locally prominent merchant, and Mary Arden (d. 1608), daughter of a Roman Catholic member of the landed gentry. He was probably educated at the local grammar school. As the eldest son, Shakespeare ordinarily would have been...

The Sonnets 1609
The History of Troilus and Cressida c. 1602
A Lover's Complaint
The Phoenix and the Turtle
The Passionate Pilgrim
Pericles Prince of Tyre c. 1608
The Rape of Lucrece 1594
Venus and Adonis 1593


Free Books in the public domain from the Classic Literature Library ©